Friday’s event at the de Young Museum – four sets of shiny new music and film, on two stages – was pretty far out. Fay flew out from New York to join the San Francisco musicians in the 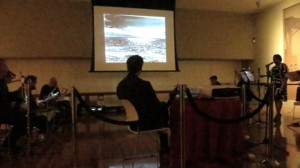 band, and we tried some brand-new music for two pieces with Alfonso Alvarez’ video, and two different versions of a long meditative piece with Konrad Steiner. Konrad also brought some very short clips that we used for duo and trio improvisations – these were a lot of fun and I think will make it into the final Glorious Ravage as transitional material between the longer, more epic songs.

The audience members I spoke with seemed intrigued and compelled by 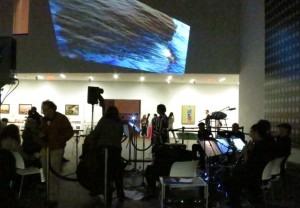 watching the work unfold over the course of the night – the same film with slightly different music and improvisations, a different cut of a film screened earlier, with the same musical material … I felt like I could have talked for an hour before or after each set to prepare peoples’ eyes and ears and involve them in all the decisions we were making, struggling with, experimenting with –  but it wasn’t a lecture, so hopefully they were able to figure some of that out on their own.

The biggest thing I’m wresting with, given this new information of trying some of the music live with projection (and only 8 of the 15 musicians), is the need to rein in some of the freedom I want to instinctively give to the 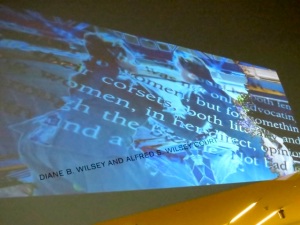 musicians, so these pieces can be constrained by the length of the films. My impulse is to let things go where they need to musically, when a section is meant to be open-ended and things are cooking. But I have to always keep an eye on time passing… so that balance is something I’ll be grappling with … the music needs to breathe, but also needs to fill a pretty specific container.